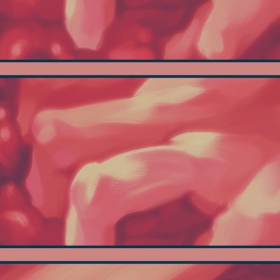 Aelur’s art is dark in more ways than one. Be their paintings inviting or foreboding, there is a sense of mystery comparable to a vivid fever dream; ambiguous enough to keep you guessing and iconic enough to make sure you never forget. Their common themes explore the more macabre corners of the mind and esoteric angles of the world. Full of rhythm and motion, each painting draws you in and suggests more than words can capture. With a mastery of colour, they can turn even the brightest setting into something concerning, or the darkest pit into a place of wonder.

A professional cake decorator and recreational artist/writer with delusions of granduer currently residing in Silver Spring, Maryland. They like sitting quietly in the dark, showtunes, and medical textbooks from turn of the century America.

Using primarily traditional media while dabbling in paper-cutting, they craft sweet, wistful works of beings that are never quite right, and seem to exist outside of our realm of morals and social practices. 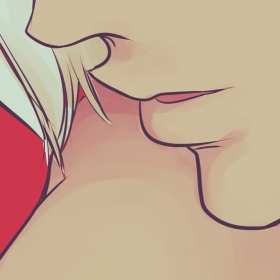 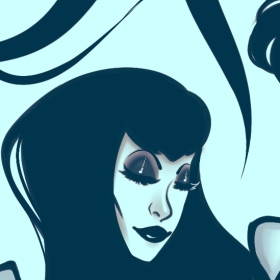 A freelance artist, graphic designer, and writer living in the Charlotte area of North Carolina. Though digital mediums are her primary focus, she also enjoys breaking out the pens and putting them to paper.

Inspired by the cemeteries and ghost stories of cities such as Charleston and Savannah, the dark and macabre has been incorporated into her art since her teen years.

Eroticism and gore are other major themes that make their appearances in her work, having been a fan of the Gothic and horror genres for over a decade. 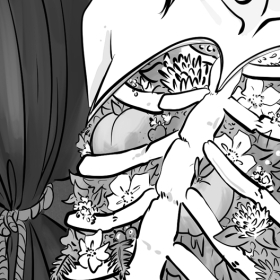 Q.W.C. is an alias for an unassuming illustrator who wants to produce art and stories that may be controversial or misunderstood. Also known as Mr. Cat, he is the writer and artist behind the webcomic Carrot Soup, a dark but humorous tale of demons, cute boys, Victorian apocalypse and D/s dynamics. With equal influence coming from Jacob’s Ladder, Card Captor Sakura, American Psycho, and Hello Kitty, his art is a mix of all things sinister and adorable.

is an aspiring comics creator, freelance artist and prone to stray into occasional authorial attempts. They currently reside in southern MN, and are often found buried in video games or tabletop RPGs. The artist’s works range from controversial topics like drugs, mental health and rape to saccharine found family stories and romances full of soft-fluffy unicorns frolicking in rainbows. Their current works are heavily inspired by punk music, manga, and a growing cultural and political awareness, as well as the general malcontent felt by many drifting millenials.

A freelance designer, illustrator, and amateur writer based in Louisiana. Her work ranges from pencil sketches to graphic design, incorporating both computer-based and manual imaging. Much of her personal work is driven by a mixture of pop culture, music, and catharsis, and her style is greatly influenced by graphic novel artists and mangaka of her youth. She plans to continue creating comics and writing short stories in the future.